They weren’t the only ones—this sponsor had unfortunately decided to cease all of their current contracts as well. But given the parallels between Gladstone’s most famous yacht and Pronamics, we decided we needed to step onboard.

Back in the late 50’s, Noel Patrick decided to design and build a boat that could win the Brisbane to Gladstone Yacht Race.  He built Wistari on a very tight budget with likes of war surplus plywood for the hull and lead for the keel from likes of car batteries, roofing nails and old shower bases.  The design was twenty years ahead of its time.  Wistari cost a grand total of $3,500 when she was launched in 1965. 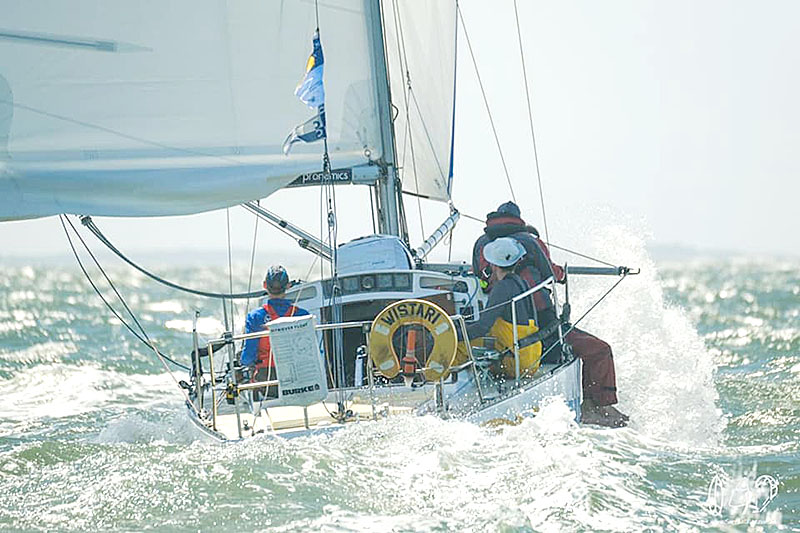 Wistari won the Brisbane to Gladstone Race four times between 1971 and 1982, and Noel passed away just over a decade later in 1993.  The boat continued to sail under the competent captaincy of his son, Scott, who with various family members such as brother Ross, nephew Andrew and son Tim raced the boat for the past 28 years – the same duration as his father Noel.

This family continuity is akin to Pronamics’ own.

From seasoned estimator Glen Townsley, who wrote software to help himself and others like him, the company is now under the very competent next-generation leadership of Ben and Johanna Townsley.

The Townsley’s know and respect the value Gladstone and central Queensland brings to the state, so very much wanted to give something back to this historic icon for the region. With the extensive multi-million dollar budgets on much bigger and more modern yachts, we certainly didn’t expect much more than a solid effort from Wistari.

Imagine our delighted astonishment when, surviving heavy weather that snapped the mast of line honours favourite Blackjack, Wistari flew into port first on corrected time to win the Courier Mail Cup for the fifth time to equal the second-best yacht of all time, with a very respectable 32 hour 40 minute race time—her second shortest in 51 races.

The boat hasn’t won the race for 39 years, but that didn’t stop her from participating in all except six races, out of her record equalling of 51. It is a testament to Scott Patrick and his family members and various crew over the years, to keep the boat sea worthy.

We are proud to support a legacy that deserves recognition throughout Queensland and Australia. Pronamics’ hopes that their sponsorship will keep Wistari racing for some years to come, especially because next year will set a record and mark Wistari as the longest racing yacht for the Brisbane to Gladstone with 52 races.

We look forward to being on board then too.