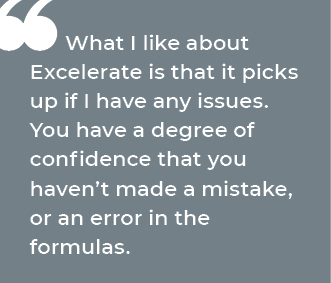 Rob was fed up with using cumbersome and unreliable spreadsheets to create estimates. One error in a formula or cell would cause major issues to calculations, not to mention the time wasted tracking the cause of the error. Pricing a project was an arduous and manual process at best.

So Rob went looking for a program that would allow him to increase his productivity and have confidence in the results. It had to be cost-effective, easy-to-use, and highly reliable.

After downloading the free trial, it soon became clear that Excelerate was the exact tool Rob was looking for. Replicating his resources from his spreadsheet was as simple as ‘copy and paste’ – meaning he was off and racing creating working projects without having to start from scratch. Being able to create template projects also allowed Rob to optimise his processes through repeated reuse, reducing the amount of time spent creating estimates.

Chomping at the bit

Rob believes that Excelerate has significantly reduced project errors and reined in the time spent pricing projects by at least 75%.

After putting Excelerate through its paces, Rob’s more than happy to recommend it to anyone who is looking for a leg up with their estimating needs.