Up Den Gunn delivers contracts ranging from estimating and tender management to quantity surveying, with extensive experience in Project Control for both the construction and engineering industries. 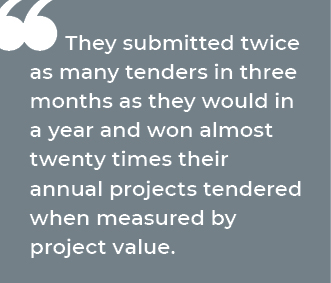 Jan was approached by a client who had some ambitious goals which, if successful, would transform their business. Their goal was to reach a number of targets over the course of 12 months which included: doubling their tendering win/loss ratio, drastically increasing the average value per tender and doubling the number of project submissions.

best of the best

A number of focus points were developed between Jan and his client in order to reach their goals. These points included an increase to overall Tender Accuracy (including managing Project Specific Overhead Costs), last minute margin adjustments and the ability to work on multiple projects, all at different stages of development.

Expert Estimation Genesis had both the power and the feature sets needed to achieve their focus points.

Within three months of implementing Expert Estimation, the client achieved their ambitious targets.

They submitted twice as many tenders in three months as they would in a year and won almost twenty times their annual projects tendered when measured by project value. Some of these projects were won based on their presentation rather than price. Now, rather than chasing tenders, UDG’s client is being sought out to tender for work.